Evaluating where Minnesota is at in Year 3 of the Fleck era. In future parts we'll look at where we could have gone, and where we are vs. vs. historical Minnesota coaches.

The conference season is over, signing day has come and gone, and Bowl Season has begun. While we wait for the Outback Bowl, I want to start taking stock of where Minnesota is in P.J. Fleck’s third year at the helm. Let’s look at the other programs that are also on their third year and see how we compare.

In the 2016-2017 off-season, 22 FBS programs hired new coaches. Of these, 9 were in P5 programs, of which one was P.J. Fleck. Since there are significant systemic and competitive differences between P5 and non-P5 programs, we’ll limit comparison to P5 hires.

Of the 9 hires, the Big Ten and Big XII were responsible for 3 each, the Pac 12 for 2, and the SEC for 1. Aside from conferences, there were essentially three situations these coaches were hired into: stable programs hiring known-quantities with lots of resources, middling programs with some prior success  had fallen on hard-times, and struggling also-rans looking for a transformative hire. For reasons discussed below, we’ll focus on the last two.

The stable program hires were Lincoln Riley at Oklahoma and Ed Orgeron at LSU. Riley replaced Bob Stoops following his retirement, and had four years to prepare as Sooner Offensive Coordinator. He inherited a program that had won the Big XII and the Sugar Bowl the previous year. Ed Orgeron’s situation was somewhat more challenging following Les Miles’s 2016 mid-season dismissal, but he coached the remainder of 2016 as an interim and finished a respectable 6-2. Under Riley, Oklahoma has gone on to three consecutive 12-win seasons, and Orgeron has improved each year capping it with a 13-0 2019 and the #1 seed in the College Football Playoffs. Neither of these situations represent meaningful comparisons, so we won’t speak of them again.

The “middle” programs are Texas, Baylor, and Oregon. Texas is not resource-limited, but in 2017 three consecutive 7-loss seasons resulted in Charlie Strong’s dismissal and the hiring of alumnus Tom Herman from Houston where he had a 2015 Peach Bowl appearance and a 5-0 record against P5 teams. Matt Rhule had arguably the heaviest lift at Baylor in the wake of a shameful sexual assault scandal that resulted in the removal of Art Briles as well as the AD, Title IX coordinator, and finally University President and noted ethics and sexual affairs expert Ken Starr. Rhule was no stranger to tough situations having taken Temple from an embarrassment to consecutive 10-2 seasons, but this would be different. Oregon brought in Willie Taggart from USF after he finished 10-2, the first double-digit season in Bulls history. However, after the 2017 season Taggart skipped town for Florida State and then was fired mid-2019 before landing at FAU after Lane Kiffin’s departure. Due to the move of this real-life soap opera we’ll exclude him from the analysis as well.

The struggling also-rans include Minnesota, Purdue, Indiana, and California. We all know Minnesota’s story. Jeff Brohm was a popular speculative target for Minnesota among some fans and press but the likelihood of his ending up at Purdue was well known after much success at WKU. Tom Allen at Indiana was the previous Defensive Coordinator and coached the 2016 Foster Farms Bowl following Kevin Wilson’s resignation. Like Orgeron, this gave him a head-start but the similarities ended there, as Indiana had gone 45-77 in the previous decade. Finally, Justin Wilcox joined California after a journeyman assistant career including highly successful stints as a Defensive Coordinator at Washington, USC, and Wisconsin.

How Do You Measure a Coach?
Three ways: Recruiting, On-Field Performance, and Wins. Also by height but that’s not important here.

Recruiting
The world of college football recruiting is extraordinarily specialized, requiring knowledge, experience, and connections. I have none of those, so I will kindly direct you to the “Merry Recruitsmas!” episode of the fantastic Taken All Wrong podcast to hear more from people (@jdmill and @GobieMN) and undead robots (@MVofBOT) who are superior statisticians and more dialed-in to the recruiting world than I am.

That said, I’m using the 247 data that Kyle Goblirsch explains in the podcast. The “average rating” or “composite” is a measure of the ranking across multiple services, intended to level out bias by one vs. another. The “Team Score” represents 247’s interpretation of the relative recruiting class strength. Note that in both of these charts, Year 1 represents the 2017 recruiting class, and Year 4 represents the 2020 class just signed on Wednesday. Sections are separated by a big black bar. 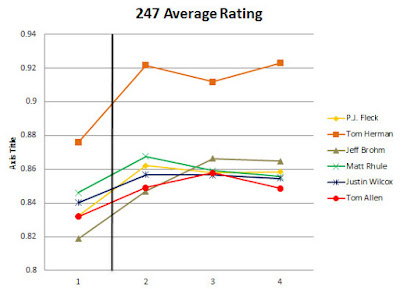 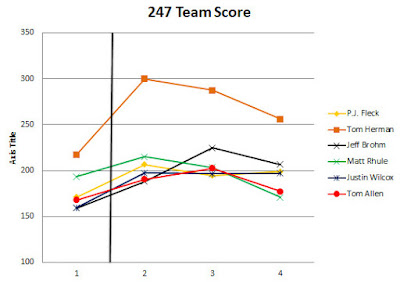 This data alone doesn’t draw many conclusions. Most of the coaches hired in 2017 are performing in roughly the same sphere overall (the upper 40 of the 130 FBS teams). There’s a smoothing effect in the average ratings which is to be expected, but it’s noteworthy that 247 values Texas’s recruiting less than the aggregate and Purdue’s somewhat more. Either way, Minnesota is doing significantly better than it was in the 2017 class led by Tracy Claeys. It’s also noteworthy that Minnesota is the only team trending upwards by both sets of measures from 2019 to 2020.

Offensive/Defensive Production
The source for this data is sportsreference.com since the NCAA website was shockingly giving pretty inconsistent data when I wrote this. Note that unlike the recruiting section, Year 1 in these charts is 2016, the final year under the previous coaching regime, and Year 4 is 2019, the conference season just concluded two weekends ago. I’m aware that these numbers are an over-idealized interpretation but this is a summary, for Pete’s sake, cut me some slack. 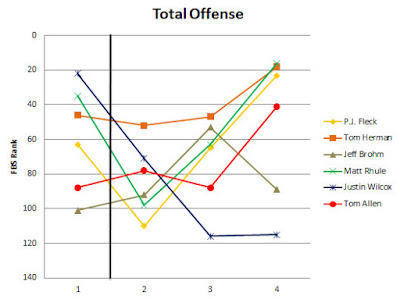 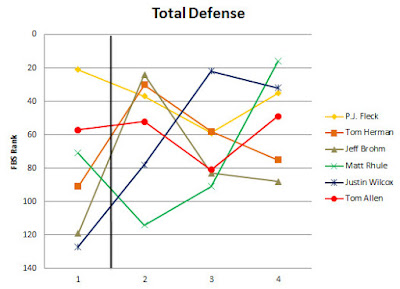 There’s a lot more noise here which isn’t surprising since each coach has different philosophies. That said, I think we can agree that ideally you want both your offense and defense to be trending upwards at the same time. Minnesota’s offense has been on an upswing since 2017; it’s defense was dropping until this year, likely due to the Smith-Rossi exchange last year. Say what you will about Tracy Claeys but the guy knew how to coach defense*.

Of the 6 teams in this analysis, Minnesota, Baylor, and Indiana are all trending up in both categories in 2019, while only Purdue is trending down in both, though an argument can be made that the offensive ranks for 2019 are unduly affected by injuries. Regardless, if I’m P.J. Fleck I’m feeling pretty good about this. Based on these datasets, despite similar recruiting to the teams in this comparison, Minnesota is outperforming most of them on the field. But does that translate to wins?

Just Win, Baby
The ultimate determination of a team’s success is wins and losses. Here we look at overall and conference winning percentage, accepting that non-conference and even conference schedules aren’t all equal. Win % is used rather than Win/Loss due to uneven schedules from bowl games and conference champ…LOL J/K. Like the offense/defense charts, Year 1 is the last year of the previous coaching regime. 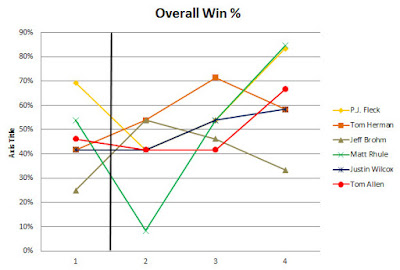 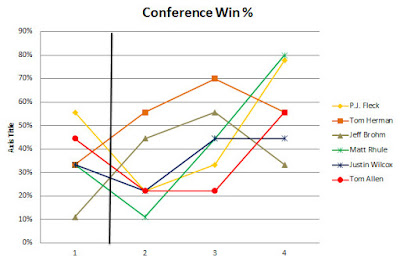 Reviewing overall and conference performance result in similar patterns for most teams with the exception of Purdue which has had particularly troubling non-conference performances in 2018-2019. Once again, Minnesota and Baylor separate themselves from the pack, with Indiana slightly behind. California is flattening out, Purdue and Texas are trending down.

So What?
Baylor and Indiana are outperforming their recruiting measures. Texas is not, and Tom Herman must be at least a little bit concerned that he hasn’t been able to transfer the resources and recruiting performance of his program into on-field success. If recruiting is a leading indicator he should have a big 2020. If he doesn’t, the hot seat is probably waiting. Likewise Justin Wilcox could be in trouble at Cal, where his recruiting and winning percentages have flatlined and his offense is downright atrocious in the weaker of the two Pac 12 divisions. Defense might win championships but it hasn’t won the Pac 12 South. Jeff Brohm probably gets something of a pass due to the injury-ridden 2019 but if his on-field performance doesn’t trend up in 2020 things are going to get rough in West Lafeyette.

Let’s get to what we care about. Minnesota under P.J. Fleck is performing very well compared to other programs that brought in coaches the same year. Fleck has managed to do more with the talent that he has than a lot of his counterparts. Offensive and defensive performance are trending the right direction, and as MV and Gobie shared on #TAWpod, some critical areas were addressed with the 2020 recruiting class. Again, if we take recruiting as a leading indicator, Minnesota might not be a world-beater but it’s in a good place given the productivity Fleck seems to be able to get with what he has, which is at least 1 level above what his predecessors got with a lower level of recruiting.

I can’t see any other conclusion than to look at Minnesota and feel optimistic about where this program is and where it’s heading. All things being equal, Minnesota is getting at least as much, and in most cases more, out of its coach than programs in a similar situation.

Footnotes
*In the Big Ten.

Posted by biffthetick at 7:00 AM