Here's how the Gophers Win the West

Ok, I let the overwhelming weight of our history against Michigan get the best of me and I panicked.  I didn't expect a passing game from the Gophers, but all of the sudden it existed!  Hoke went with surprise (as in, "surprise, he's terrible!") starter Shane Morris at QB and we worked him over like Rocky on a side of beef.  What a glorious and wonderful result that was!

We've played one glorious game in the B1G Ten and the West division seems up for grabs.  You know the old adage "take it one game at a time"?  Well, we're going to do the exact opposite of that here because adages are stupid.

As Frothy has mentioned, we're not used to this winning thing, but maybe, just maybe, this is a team we can believe in.   What if we're actually, you know, kinda good?  I thought I'd spend a little time going through the remaining B1G Ten schedule and see just what needs to happen for the Gophers win the division. 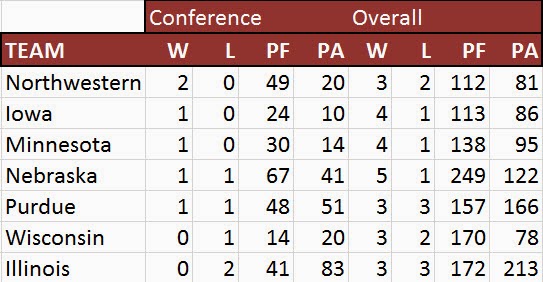 Using the current Sagarin ratings, here's how the rest of the year plays out:

Stupid Wisconsin wins out according to these ratings.  Here's how the standings would look: Wisconsin sits atop, but MN is tied with both Nebraska and Northwestern in second place.  In order to get Minnesota on top we need one of a few scenarios to play out:

Scenario 1: Minnesota beats Wisconsin at the end of the year -- Boom that would do it.  MN and WI would be tied at 6-2 and the tie-breaker for two teams is head to head results.

Scenario 2: Wisconsin loses twice more; preferably to MN and someone that isn't Nebraska -- If Wisconsin gets two more losses and they're to Minnesota and Nebraska, then they would fall to 5-3 and Minnesota and Nebraska would each be 6-2 and we go to tiebreakers.  The tiebreaker for two teams is head to head results.  In this scenario, MN has lost to Nebraska.  If the Gophers beat Nebraska and Wisconsin, the point is Fred Smoot and we're drinking until Roseanne Barr is pretty.  So this scenario would take MN and Iowa to beat Wisconsin or MN and either MD or Rutgers.

Scenario 3:  MN beats WI, but Nebraska or NW also have 6 wins -- This is the dreaded three headed monster tie-breaker scenario.  The rules are as follows:

This one seems a long shot, especially if Nebraska is in the mix since they did not lose in non-conference play.  The Gophers would gain some advantage in the 2nd tie breaker as the OSU loss would be outside the division.  The rest of the tie breakers makes my head explode, so lets stop there.

One thing is for certain, all of this cool guessing and standings prediction stuff doesn't mean a thing if the Gophers don't win on Saturday against Northwestern, but I'm starting to believe!*


*"believe" aka "set myself up for tremendous heartbreak"