Your everlastin’ season you can feel it fadin’ fast
So you spend a lazy Sunday crunchin’ numbers on the past
Would you know a Special Season if you held it in your hand?
The Gophs you take for granted I can’t understand

The 2019-2020 sports season has begun its death spiral towards the wet, hot summer in earnest. It won’t be long before we stop basking in the waning glory of 2019 and turn our attention to the hope of 2020 and try to learn what it means to have expectations. For today, let’s reel in the third-years of Gopher coaching history.

Despite our best efforts to move on from the damage Gopher football has done to our collective psyche, like a supernatural manifestation of our minds (a Badgerdook?), our past is still on the edge of our consciousness threatening to jump out at any moment and hijack our dreams. Rather than push it off let’s address it directly, with data and charts!

Cut to a David Lynch-style scene: Distant, filtered Roy Orbison deep-cuts echo through a cold, purple-lit server farm warped like a funhouse mirror. The façade of one of the towers begins to melt, revealing a giant can of Miller Lite backlit by blinding white light. Its tab opens and a shriveled Nosferatu-like creature gradually floats out, its eyes an empty, carbonated brown. Suddenly they focus, its mouth opens in righteous anger and takes strength. MV has awoken…and he hungers…

*shakes head* Wow, I’ve been sick this week and the dreams are weird, get your flu shots. ANYWAY, we’ve compared Year 3 of the P.J. Fleck era to his P5 contemporaries who were also hired in 2017. In this rendition we face our past and compare it to historical Minnesota coaches.

Before we dig in, disclaimers. It’s really hard to compare performance across eras. The styles, opponents, equipment, skill and conditioning levels, playing conditions, and even societal factors such as racism and segregation make true apples to apples comparisons impossible and the noise gets louder the further back you go. I know just enough about statistics to get into trouble, and I’m not an expert at normalizing for these factors, so I’ve done my best through the following:

Just win, baby. It’s the ultimate measure of success, at the end of the day the single most important statistic. However, it also conceals multitudes…a coach could go 6-6 two seasons in a row but lose by an average of a touchdown per game in one season, and by less than a touchdown total the next. Objectively those seasons are not the same, so this is an indicator but not enough on its own.

Since 1922 the Gophers have had 17 new coaches not counting Jeff Horton who finished out Tim Brewster’s final season for him (thanks for the Pig, Jeff!). Of those coaches, three didn’t make it to Year 3 (Fritz Crisler, Lou Holtz, and Tracy Claeys) and 1 (also Claeys) didn’t make it to Year 2. Those coaches are included in the chart below but excluded from all further analysis. 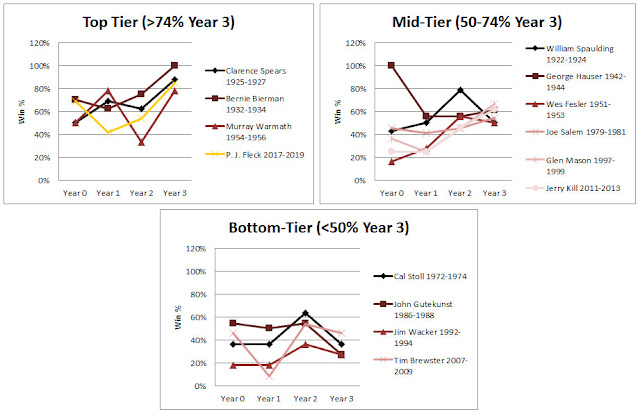 Top Tier with Clarence Spears, Bernie Bierman, and Murray Warmath? P.J. Fleck is in good company and has the right trajectory. Bernie won a National Championship in his Year 3 (1934) so that’s tough to match but it’s impossible not to feel good about that chart.

Mid- and Bottom-Tiers really highlight Minnesota’s run of impotence starting in the early 70s. Glen Mason and Jerry Kill, the second and third best coaches of my lifetime, are squarely in the middle with such luminaries as Wes Fesler and George Hauser. It’s worth noting that the same Athletic Director is responsible for hiring 2 of the 4 Bottom-Tier coaches and while he *technically* has a Mid-Tier in Joe Salem, Salem’s overall career is decidedly Bottom-Tier. Paul Giel…we’re going to need to talk.

Having a working hypothesis based on Win %, it’s time to dig into team performance.

“Figures often beguile me, particularly when I have the arranging of them myself.” –Mark Twain

Win % is easier to normalize across era than offensive or defensive performance. The forward-pass might been legal in 1924 but William Spaulding wasn’t running the RPO and he didn’t have access to the type of athleticism that even Jim Wacker had. To approach the issue I took to measuring them against their peers at the time and comparing them across time using those measures, which is what Sports Reference attempts to do with their Simple Rating System or SRS. They provide a detailed breakdown on their website https://www.sports-reference.com/cfb/about/glossary.html#srs.

The SRS is measured in points above/below average which is set to zero, with upper and lower bounds to the margin of victory (24 and 7 points, respectively). There is an overall SRS, as well as Offensive and Defensive SRS ratings for each team. The higher the SRS, the more “above average” the team’s performance is within the category. Negative numbers indicate a below-average performance.

Scoring Offense and Scoring Defense represent points scored and allowed per game during the season. Sports Reference adjusts them for the team’s Strength of Schedule, though the precise formula is not readily available. Point is, for Scoring Offense you want a high number, and for Scoring Defense you want it to be low. Negative numbers are possible due to the SOS adjustment.

The charts below demonstrate these metrics for our fourteen 3-year coaches in the order based on the Tiers we set above. If these statistics are correlated to Win %, we should see that reflected in the heat mapping, which is applied across the coaches on a per-year basis. Note that Year 0 uses a blue-to-red color scheme rather than the green-to-red to differentiate. 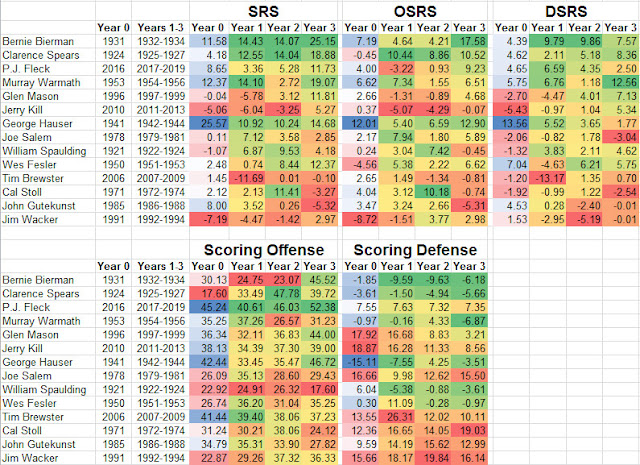 At first glance, you might look at these and think that 2019 should stand out more than it does. Judged solely on the overall SRS metric it comes in 7th behind George Hauser and Wes Fesler. What’s going on?

Well, first thing to consider is that there is no single season among any of these coaches that claims #1 in all 5 categories. Only Bernie Bierman’s Year 3 National Championship in 1934 comes close at #1 for SRS and OSRS, #2 for Scoring Defense, and #3 overall for DSRS and Scoring Offense. Bierman’s 1934 team was exceptional, particularly on defense with 4 of 8 games that season being shutouts; his defense allowed only 38 points total in the remaining 4. Yet that still wasn’t enough to rank #1 in all categories; one must look at the whole rather than just the part. There isn’t a single stat that tells the whole story, but this is the only comparative season here that I would argue was excellent in all aspects.

Clarence Spears’s 1927 Big Ten Title performance was strong but a clear step down at #2 for DSRS, #3 for SRS, OSRS, and Scoring Defense, and #5 for Scoring Offense. Murray Warmath tied for 2nd in the Big Ten in 1956. He ranked #1 in DSRS and Scoring Defense, #2 in SRS, but #6 in OSRS and #10 in Scoring Offense. The details of the season bear those numbers out: Warmath’s Gophers never allowed more than 2 touchdowns in a game but their offensive peak was in the season opening 34-14 win at Washington, never scoring more than 21 after that.

The defensive statistics may seem harder to reconcile considering Joe Rossi’s performance, but the entire season has to be considered. 3 close non-conference games, a Purdue game that looked closer than it was, a really bad performance against Wisconsin, and 24 points allowed to Auburn. It wasn’t exceptional but it wasn’t bad, and the offense was so good for most of the season that it usually didn’t matter. The 2019 team achieved more with what it had than most of its historical comparators.

Take for example Glen Mason’s 1999 Sun Bowl season, which ranks only slightly behind Fleck’s Year 3 at #2 SRS, #4 DSRS and Scoring Offense, #7 in Scoring Defense, and #8 OSRS yet he translated these into an 8-4 season rather than 10-2. Jerry Kill managed to achieve 8-5 in 2013 thanks to a favorable schedule and some very close wins which the data reflects (#6 DSRS and Offensive Scoring, #8 SRS, #9 OSRS and Defensive Scoring).

What other fun or sad tidbits are there? Spears probably owns the best overall Year 1 and 2 performances. Bierman’s offense took a couple of years before it started to work but his defense was excellent from the beginning. Considering Tracy Claeys’s reputation as a strong defensive coach, the early numbers for Kill don’t really reflect impressive performance. Poor, forgotten George Hauser covered for Bierman while Bernie was in the Marines during WW2. He didn’t do bad, in fact his performance stats were better than expected, but he struggled to translate those into war-year wins.

Finally, the Bottom-Tier definitely pans out. Cal Stoll’s Year 2 offense wasn’t terrible but it’s the lone positive point. The defenses were all objectively awful. If we mapped these out to Years 4 and beyond, Joe Salem would move into this group. If anything, this data puts Tim Brewster in some new context for me. He was bad, yes…historically bad even, but hardly unprecedented.

Where this all leaves me in the context of 2019 is that P.J. Fleck’s Gophers are very well positioned even though there is still room to grow on defense. Their offense was exceptionally good, the best Year 3 scoring offense in Gopher history when adjusted for SOS. The defense wasn’t world-beating but aside from the Iowa and Wisconsin games it outperformed these metrics. In Gopher history only two Year 3 teams were better on 5 out of 6 metrics (Win %, SRS, OSRS, DSRS, Scoring Defense): the 1927 Big Ten Champs and the 1934 National Champs, and the 2019 offense was better than both relative to SOS. Murray Warmath’s 1956 team’s poor offense puts it a step below all three. In the end the only real comparables in Gopher history for Fleck’s Year 3 are the best Gopher team of the 1920s and an undefeated National Championship team. The youngest person to have been alive for either is 85.

We are in an exceptional time. Celebrate it, be a part of it, enjoy the hell out of it.