I'll get to the punchline immediately: Peej's first full class at Minnesota is the Gophers' best recruiting class in the Internet era.

It goes simply beyond comparing average recruit rating or class rankings according to the recruiting sites (Brewster's 2008 class was ranked 26th with major comparative caveats*, while this class is currently ranked 28th); visualizing the distribution of Minnesota's recruiting classes over the past decade is where Fleck's efforts really stand out.

I prefer to use a violin plot, which combines the best of box plots and density plots to showcase the "shape" of a data set rather than summarizing a range. The thicker parts of the plot illustrate points with a greater number of observations; for example, the 2018 class has the greatest density around a rating of .85. For illustrative purposes, the axis intercepts at .79 and .89 reflect the 247Sports' 2 and 4 star cutoffs, respectively.

Generally speaking, you want to see a "violin" shape with the "base" of the violin further to the right along the x-axis, as this implies a greater concentration of recruits with a higher comparative rating. Thicker "handles" to the right indicate more top end prospects at those particular density points. 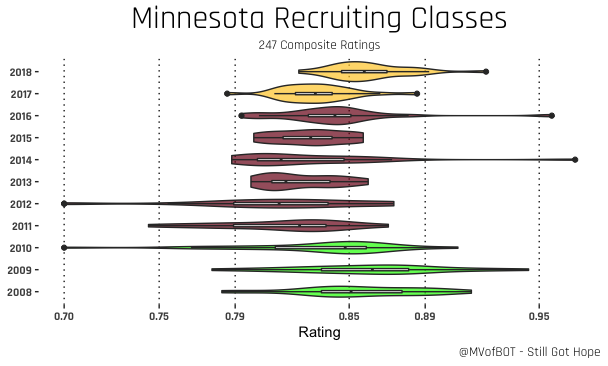 Specific call outs regarding the 2018 class:


The natural thing most in this town are wont to do is compare Fleck to Brewster, and some of Brew's highly rated class (specifically 2008 and 2009). Well, that would be a mistake for a number of reasons. Yes, the 2008 class was ranked nominally higher, though nerd notes* provide some cautions there. When you actually look at the classes in the above data viz, the distinctions become rather obvious: Fleck didn't have the "reaches" on the low end, landed more quality in the middle 50%, and won't have the academic risks** on the high end. Brewster's 2009 class, comparatively, suffers a similar fate: dragged down by the bottom, and artificially inflated on the top with high risk signees.

If you want a tl;dr description, it would be: Fleck's 2018 is, top to bottom, of higher quality and quantity than anything that came before it. And it's not really close.

What if ratings by a recruiting service aren't your thing, and you like to look at a prospect's offers to gauge how highly sought after they were? Luckily, there's a site which does precisely that: RankByOffers.com. Among data looking back to 2013 (earliest available), PJ's class still comes out on top. Violin plots for this particular data set are slightly different, since there's a greater propensity to sign prospects with only one offer (especially with in-state prospects in a non-talent rich state). Still, the shape of the data describes where most of the prospects in a particular class rest: 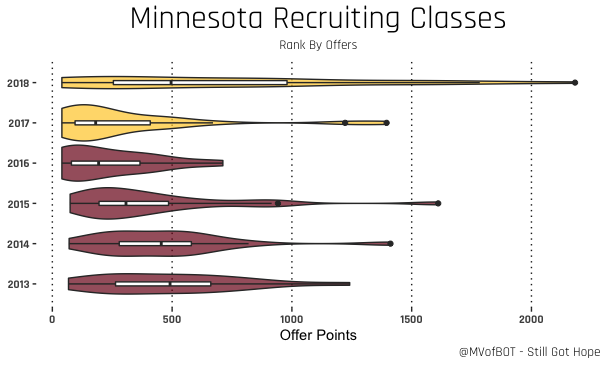 Highlights from the RBO methodology, which is a little different than a traditional rating service:


So what should we make of this class in lieu of all the inevitable platitudes and ink set to be spilled across the collective Gopher Internets?

Regardless if you prefer ratings or offers, this class will end up approximately in the Top 30 nationally.

PJ didn't use gimmicks to sign this class, as there were no package deal offers for lightly recruited players to entice a 4 star buddy.

No high risk qualifiers, nor any kids with major character red flags.

No obscure JUCO or Prep School kids whom no one has seen live.

Fleck worked his ass off for this class, showcasing what you can do here if you get the right coach and recruiter with the right pitch. He's boosting the talent level, just as he was hired to do.

* There are some technical aspects why comparative rankings are suspect prior to 2011, namely the sparse nature of ratings back then. Since 2011, 247Sports launched their own ratings, ESPN ramped up (then pared down), and Scout was acquired and consolidated with 247. If anyone truly cares about the statistical implications under the hood, blow up my mentions at @MVofBOT. I'll be waiting until the end of time, probably.

** The NCAA rules on national letters of intent (NLIs) have changed to become more restrictive since 2008. Not only is there a hard cap on 25 grant-in-aid/NLIs per program per year, non-qualifiers still count against their limit. This implication is simple: old school SEC over-signing is dead, and you simply can't afford to take risks anymore for marginal academic (or character) prospects. Tim Brewster would not have been able to sign the same 31 prospects in this environment, including uber-talented kids like MarQueis Gray.