PJ's Path to the Rose Bowl - A Still Got Hope? Analysis

Fresh off the most satisfying win in the nascent P.J. Fleck era of Gopher football, it's worthwhile to pause and reflect on both where we are as a program, and where we want to be. The latter is simple: Pasadena, preferably accompanied by a near-dusk vista of the San Gabriel's.

As to the former, I'd contend we haven't really been close to winning the conference since 2003. 2014 was fun and all, but the secret sauce was a little too much generic Thousand Island dressing and not enough meat for that perfect B1G mac attack. There was something missing, the same two ingredients absent from the Gophers over the last 10+ seasons (saying nothing of the last 50 years) inherently present in successful conference champions. The elements weren't there last season (9 wins though), aren't currently available, and generally haven't been since Glen Mason stopped pining for the Ohio State job sometime early on in the previous decade.

Reaching the ultimate goal, a trip to the Rose Bowl, requires Fleck to address the two biggest issues holding this program back: boosting the talent level of the team, and developing a quarterback.

To evaluate the overall talent level of our squad, I'll use the 247Sports' Team Talent Composite Ratings going back to 2015. I wanted to see the distribution of talent for all FBS teams, and where the Gophers stack up. 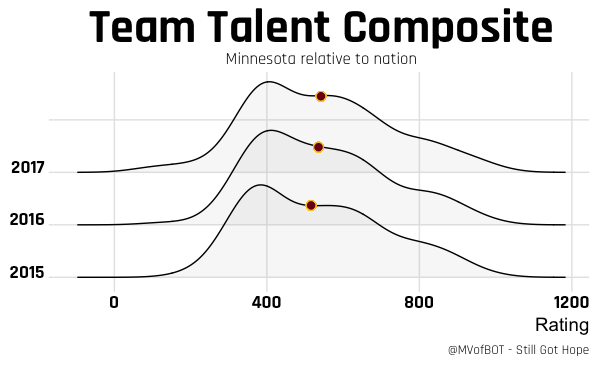 We're roughly about average from a national perspective. Yet, that doesn't tell us much, because there are 130 teams and Minnesota should really be evaluated against Power 5 teams. 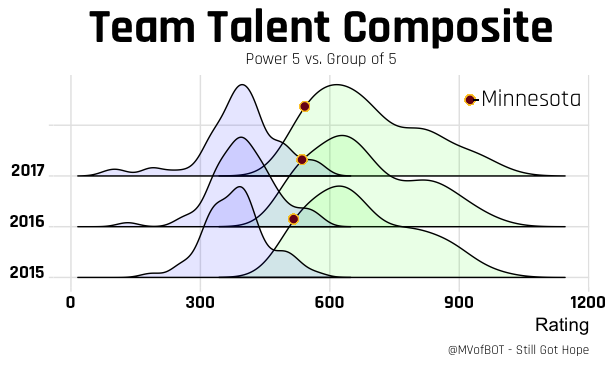 Compared to other Power 5 teams, the Gophers have been below average from a talent perspective. In fact, the previous staff recruited more like a top-tier Group of 5 program than a major conference one.

How does Minnesota stack up against their B1G competitors? Not favorably. 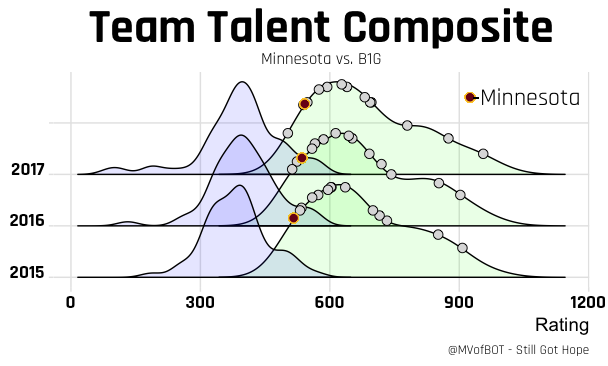 Among the other programs in the conference, only Purdue, Indiana, and Illinois have equivalent or worse talent. Not surprisingly, Minnesota is 5-1 against these teams over the last three seasons; our splendid Harboring this season is the only blemish against similarly rated foes (more on that in a bit). If one expands the definition to include Oregon State and Washington State, another pair of teams with talent in line with ours, the record jumps to 8-1.

Against all other Power 5 opponents in that span? A dismal 4-12, with victories against Maryland, Rutgers, and Northwestern last season, and the most recent 54-21 emasculation of Nebraska. The Terps and Butt were horrible last year, and even then, we did nearly everything in our power to lose to the Knights at home; Halcyon days indeed.

When 6 of your victories come against programs with equivalent or worse talent, the shine begins to wane on a 9 win season; and yet, the old dogs still howl. However, when the current coach beats a team most people have heard of and care about -- nominally a rival, no less -- people can get a relative sense of coaching acumen; there's some steak underneath Fleck's sizzle. Still, banking on your coach to steal some of Bill Snyder's incantations and run a program with nothing but wizardry isn't a sound long-term strategy.

Fun fact! Asad Abdul-Khaliq was 5th in the nation in passing efficiency for the 2003 year, coincidentally our last season worth a crap in the grand scheme of things. Not 5th in the B1G, which would normally be cause for celebration in this town, but one of the best and most efficient passing attacks in the country. Since then, our quarterback play has ranged from "fine, I guess" to "metastasized cancer of the bones and other vital organs." 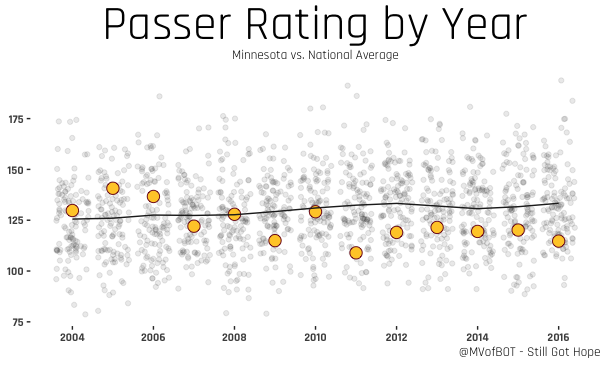 I never imagined the Bryan Cupito Era would age like a Premier Crus, but when our palate for QBs can't distinguish between grape-flavored dishwater and top shelf vino, this is where we're at.

In particular, the Kill/Claeys quarterback development system was an assembly line from high school stud to glue factory. The passer who managed to avoid a final resting place inside an Irish supermarket frozen dinner was Mitch Leidner, a man I (ironically, now) dubbed a football-playing moose. Even when the previous regime did manage to punch above their weight class by out-coaching and out-scheming underachieving opponents, lack of even mediocre quarterbacking prevented the team from breaking through the glass ceiling to engage a "special season."

And this year?
This is why God invented alcohol (and lye), friends.

Fleck has been hired to do two things:
A reasonable aim for the first point: a team talent composite rating on par with Northwestern and Wisconsin. Achieving such a goal would put the Gophers more towards the median of Power 5 programs from talent-wise. To do this, P.J. would need to land 1-2 four stars a year, and sign a class with an average recruit rating at or above .845 each cycle.

At .845, the only team with a higher average recruit rating in the B1G West would be Nebraska. The Gophers would be able to compete on equal talent with everyone else in the division, and with B1G scheduling the way it is, might be able to luck out into a favorable slate down the road (*ahem* 2019).

Second point is self-explanatory. Either recruit a passer, preferably from a state adept at producing them such as California or Texas, or develop one via alchemy. For his part, Fleck's all-in on several four star Cali prospects, any one of whom would provide an immediate injection of talent into the QB depth chart. As if that weren't enough, the starting quarterback from the nation's #1 high school program is heading here... as a walk-on.

Hopefully a signal caller will emerge from that group who can do what no Gopher QB has done since AAK: not suck hind-teat as a passer. The national average for passing efficiency is ~130; the target should be much higher, likely in the 150-160 range. Since 2009, every eligible B1G team that's posted a passer rating above 150 has won the conference in the same year.

If P.J. can improve both of these key aspects -- and he's making significant headway towards them -- it may just be a matter of time before we're all scrambling to book flights to LAX.
Posted by MV at 9:00 AM