There are people in the Gopher fan base who would have you believe that 2016 was the pinnacle of Gopher football, and that the previous coaching staff should have been retained for winning 9 games alone.

The refrain of "DO YOU KNOW HOW MANY TIMES THIS TEAM HAS WON 9 GAMES...." has been blasted all over the Gopherwebs. We've talked plenty about the issues with that 9 win season: a historically easy schedule, a team lacking discipline, a team whose academics were declining, recruiting that could cripple the program for years if it wasn't immediately fixed, etc.

Lawdamighty how depressing. Seriously, who knew a 9 win season could be completely joyless?

And that's what football games in 2016 felt like. If you attended a football game at The Bank in 2016, you know that the atmosphere was... lacking. There was no atmosphere. The place was a morgue. It was sad.

One that hasn't been mentioned as much is fan attendance.

Boy, a 9-win season must have really gotten the fans out in droves, right? Imagine the excitement! The thrill! The chance to play for a big time bowl game!

I wish there were a way we could look at a chart that plotted out attendance by game last year. I bet it's just a skyrocket going UP AND TO THE RIGHT!!!!

Oh man, and since that season was so historically significant, I bet it would be fun to look at it in comparison to previous seasons too. I bet the fan engagement was just magical. 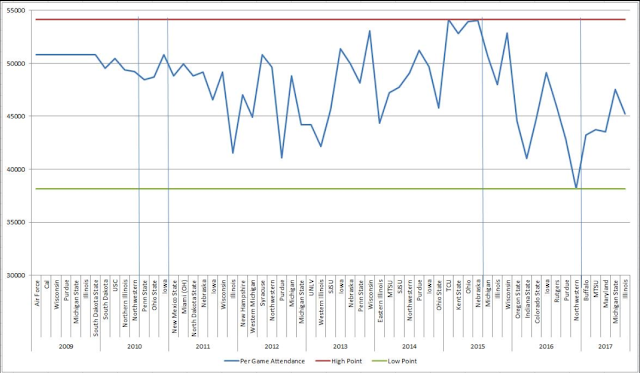 Huh. That uh... wasn't what you were expecting?

When this program was apparently, according to many in our fanbase, at it's very best, winning it's 8th regular season game in a historically significant season, beating Northwestern at home to improve to 8-3...

Now how could this possibly be?

The trajectory of the program was on its way downward. The product on the field was uninspired. The players on the team had tanked any good will the general community might have had for the team. And the coach didn't instill excitement in anyone. Not his own team, certainly not the fan base.

And attendance matters. College football teams at public institutions are seen as big business. If they aren't pulling their own weight people begin to grumble.

As a business, college football is subject to an old business adage: When the fish stinks, it stinks from the head down.

Now, if you've already dug in your heels on the previous regime and you're convinced they should have stuck around (and you are somehow still reading this), your next argument is probably: attendance was poor because the Gophers played a poor home slate of teams...

Thank you for proving my point.
Posted by jdmill at 1:17 PM